Beautiful World, Where Are You? by Sally Rooney 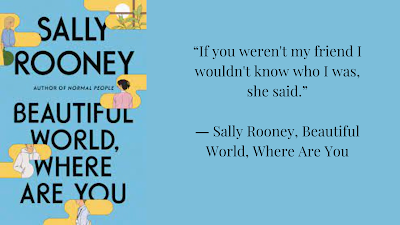 I think I must be one of the last to read Sally Rooney. I don't know why I did not read anything by her earlier, especially since she seems to get raving reviews from everyone. I can only agree.  "Alice, a novelist, meets Felix, who works in a warehouse, and asks him if he’d like to travel to Rome with her. In Dublin, her best friend, Eileen, is getting over a break-up and slips back into flirting with Simon, a man she has known since childhood. Alice, Felix, Eileen, and Simon are still young—but life is catching up with them. They desire each other, they delude each other, they get together, they break apart. They have sex, they worry about sex, they worry about their friendships and the world they live in. Are they standing in the last lighted room before the darkness, bearing witness to something? Will they find a way to believe in a beautiful world?" I did like this book, although I almost gave up from the beginning. Rooney mixes chapters with an omniscient narrator w
1 comment
Read more 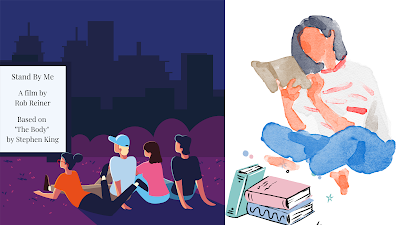 For the third session of my library's "Read the book, watch the movie" we read Stand By Me by Stephen King. It was one of four short stories in the book The Seasons . I only did read another one, Rita Hayworth and The Shawshank Redemption.    In 1947, in Maine, Andy Dufresne, a banker, is tried and convicted for the double murder of his wife and her lover, despite his claims of innocence. He is sent to Shawshank State Penitentiary to serve a double life sentence. There, he meets Red, a prisoner who is known in the prison for his ability to smuggle in contraband items. Andy asks Red to get him a rock hammer, which he uses to shape rocks he collects from the exercise yard into small sculptures. He later requests a large poster of Rita Hayworth, which he hangs on the wall above his bed. Over the ensuing years, Andy regularly requests updated posters from Red of the latest pin-ups, including Marilyn Monroe and Raquel Welch. Andy tells Red that he likes to imagine he can step
Post a Comment
Read more 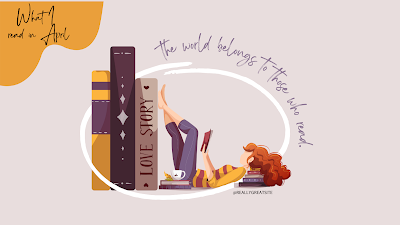 What I read in April Still behind with my challenge reading, but I have accepted that some books will take a longer time to read. Some books I have given up for the time being.  I read 11 books in April of which 7 came from my own shelves. Quite pleased with that.  A nonfiction from my TBR shelves  -  Bengtsson, Ingvar - Kapet av Skåne -  Bergstrand, Finn - Eftertankar -  Harrison, Dick - Kalmarunionen, En nordisk stormakt föds -  Blom, Tomas - Dackefejden, Det stora upproret - Turned out to be four nonfiction from my shelves. A  fiction from my TBR shelves  -  Burlin, Tua - Konungens sändebud A  translated novel outside of the English- and Swedish languages  -  De Balzac, Honoré - The Girl With the Golden Eyes  , Paasilinna, Arto - Tio rivjärn (Kymmenen rivinrauta/Ten Shrews) - Two languages; French and Finnish.  A  classic tale  -  Hedda Gabler  by Henrik Ibsen - Still reading A  book from my want to read list  - Nothing for this month. Read several books from the library connected t
4 comments
Read more

How do people read? 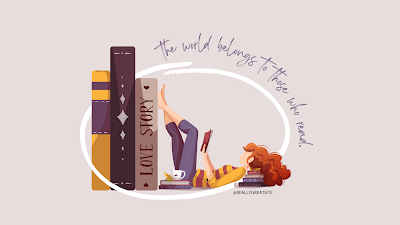 I recently read a survey done by Kulturnytt Sveriges Radio (Swedish Radio/TV cultural departement) on how people read. It was based on 1081 participants in web interviews with readers in the age group 18-79. They had 14 alternatives to choose from. I find it quite interesting so wanted to share it with you.  44% read books to relax or have peace and quiet.  40% read because they want to be "swept away by excitement and drama 28% read because they want to learn about things or discover something new Personally, I think I am a little bit of all the three alternatives. What about you?
5 comments
Read more

The Iliad by Homer 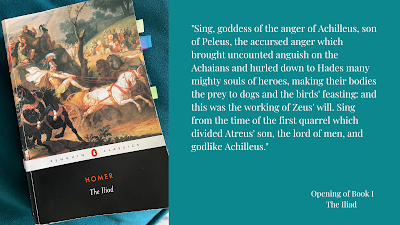 If there ever was a classical book, I guess this is it. Attributed to Homer and considered to have been written around the 8th century BC. It took me quite some time to read it. There are a lot of descriptions of people, who they are, the son of ... from ..., and fighting scenes which I don't always find very thrilling. However, it is a great story and the writing is fine even with our modern minds. I think most of you are familiar with the theme of the Trojan war, and the story, so will not go into this here.  In my Penguin Classics edition there is a summary of each book which helps a lot. Throughout the book I noted a few interesting quotes. Book 9: " My mother, the silver-footed goddess Thetis, says that I have two fates that could carry me to the end of death. If I stay here and fight on round the Trojans' city, then gone is my homecoming, but my glory will never die: and if I come back to my dear native land, then gone is my great glory, but my life will stretch long
8 comments
Read more

I still have some books from previous months to read, so I only added a few new ones. However, from time too time I do grab a book outside the challenges. Still not finished with some of the books so continuing into April with the following ones.  Kapet av Skåne , Stormaktssveriges viktigaste triumf  by Ingvar Bengtsson  Presidentskan  (La Regenta) by Leopoldo Alas Clarín Stalingrad  by Anthony Beevor    The History of the Siege of Lisbon  (História do cerco de Lisboa) by José Saramago Beyond the Thirty-Nine Steps, A Life of John Buchan  by Ursula Buchan  My own challenge outcome for March a nonfiction from my TBR shelves  - The Magdalene Legacy by Laurence Gardner a fiction from my TBR shelves  - The Secret Place by Tana French a translated novel outside of the English- and Swedish languages - The Duchess of Langeais by Honoré de Balzac (e-book, French) and Jar City by Arnaldur Indridason (Icelandic) a classic tale - The Iliad by Homer (what can be more classic than this one?) a
8 comments
Read more

An Officer and a Spy by Robert Harris

- March 21, 2022
Robert Harris' excellent historical fiction on the Dreyfus affair was on the program for the second gathering at the library for "Read the book, watch the movie". We had a good discussion on both the book and the film. The film J'accuse  is French and directed by Roman Polanski. The French title is, as you all know, referring to the newspaper article that Emile Zola wrote in defence of Alfred Dreyfus and how he had been treated. It is a dreadful story and " has come to symbolise modern injustice in the Francophone world, and it remains one of the most notable examples of a complex miscarriage of justice and antisemitism." (Wikipedia). It was at times difficult to read about the judicial and military systems, and how they  produced false evidence, although they knew that Dreyfus was innocent. The antisemitism was shocking,  both to read about and watch in the movie.  "Paris in 1895. Alfred Dreyfus, a young Jewish officer, has just been convicted of treas
6 comments
Read more
More posts