Showing posts from December, 2013
Show All

All Quiet on the Western Front by Erich Maria Remarque 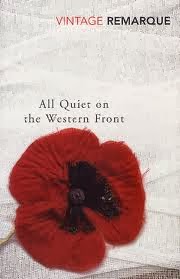 This is a real classic and a book that we decided to read in one of my reading groups. It was totally different from what I thought it would be. I thought it would be heavy, tragic and with horrible details of the times at the front. It is horrible of course but told in an easy and accessible prose. It is told in first person singular with the voice of nineteen year old Paul Bräumer, a soldier at the Western front during the first world war. We follow Paul from the first staggering steps as a new soldier into the more routine soldier who has been there and seen it all. It is told in a matter-of-fact way that makes you feel you are standing beside him and experience all the things he experiences. That is probably also why you can identify with him. You follow him in school with his friends who also enrol. During the initial training which does not prepare them for what they are about to experience. Through the bullies who think the most important thing is the drill and who punish the
Post a Comment
Read more
More posts