Showing posts from November, 2012
Show All

- November 20, 2012
So, made it through all four books. They were great but like with all these sagas it tends to be a little bit repetitive and long towards the end. However, here is a real fairy tale and it seems they live happily ever after. The story is fantastic and it brings out all the morals that we all should live by.  A story of love and peace. In a way a family saga as well. The most amazing thing is that after having read it you really feel quite familiar with both vampires and werewolves!
Post a Comment
Read more

What can I say? I am hooked! Who could believe this? Not me at least. I was never the one liking vampire books or even the idea. But this is something totally different. I did read 'Dracula' by Bram Stoker recently and found it rather interesting in spite of everything. To read the 'real' story instead of watching all the movies. I am also in the process since some time to read 'The Historian' by Elisabeth Kostova which has a vampire theme. Haven't finished it yet, but sure will do soon. It was pure coincidence that I got into the books. They showed the three movies on three consecutive days on the TV. Only managed to see the two first but that was it! I had a craving for reading the books. Now I have just finished the second one and am starting directly with the third one. I don't really know why it is so fascinating and why I get so into the story and the characters. Maybe the theme of eternal love! A love story that conquers everything. The sto
Post a Comment
Location: City of Brussels, Belgium
Read more

Where are you reading? 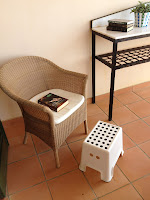 Trish, Kailana and Lisa are asking where we are reading? I read almost everywhere! When I am in Mallorca, which I was last week, my favourite place is a corner on the terrace. My reading corner ...and the view! Here is where I read! This is my beautiful reading corner when I am in Mallorca. It is nice in the summer heat because the sun does only come this far in the evening. In the winter it is not so but on a normal, nice winter day in Mallorca (and they are normally quite nice) it is still a pleasure to sit here. Book shop to recommend I also have to share with you a wonderful reading place I found this time. If you ever come to Mallorca you have to visit the 'Fine Books' shop (and maps) in the old city of Palma. Adress: Calle Morey 7 (off Plaza Santa Eulalia). It is an absolutely wonderful place. It made me think of the 'Cemetery of Forgotten Books' in Carlos Ruiz Zafón's book 'The Shadow of the Wind'. The shop has
Post a Comment
Read more

The other book is 'Paganinikontraktet' (The Paganini contract) by Lars Kepler (being not one man but a man and wife!). Read with pleasure their first book 'Hypnotisören' (The Hypnotiser) which was almost unbearably exciting. The second is slightly different and moves in international circles. The head of the office for the Swedish War Material Export is found hanging in his living room. There is no chair under the rope but Chief Inspector Joona Linna still thinks it is suicide and not murder. Simultaneously, the sister of peace activist Penelope Fernandez is found dead on their boat with no trace of Penelope or her boyfriend. Without knowing why they are chased around the archipelago of Stockholm by a professional assassin.
Post a Comment
Read more

In the Woods by Tana French

- November 01, 2012
This is a really good book. The story sounds very spooky when you read the back cover but it turns out that it is not. Ok, there are some pages but on the whole it is a thrilling story. Twenty years ago three 13-year old kids, two boys and one girl went into the woods to play as they usually did. Only one of them came out and he was found stuck to a tree in a terrified state, with blood in his shoes and no memory of what had happened.  Now, twenty years on a young girl is found murdered in the same woods and connections are made to the old case. The narrator is Rob Ryan, former Adam, the boy that survived the incident. He is now a detective in Dublin.  His partner since just a couple of days is Cassie Maddox, a tough young woman. There is a freshness in these two characters. They are very close friends and they have a relaxed jargon, raw but hearty and they take care of each other; best mates in other words. A third colleague is linked to the group and he has difficulties to understand
Post a Comment
Read more

This is not the end of the book, discussion between Jean-Claude Carrière and Umberto Eco

This is a book discussing the future of the book. Jean-Philippe de Tonnac (writer and editor) is interviewing Jean-Claude Carrière (writer, play- and screenwriter) and Umberto Eco (no need for introduction) on the future of the book in this digitalised world we are living in.  A philosophical discussion covering also other art forms. I myself can feel that there is no future for the paper book, but these two are still optimistic. Let’s hope that they are right. The book is written as a play write with dialogue and each session cover a subject. It is difficult to make a summary, but I would like to share with you some quotes from the book.
Post a Comment
Read more

A while ago I went to a writer's meeting at the Sterling Bookshop in Brussels. It was a fabulous evening. Chris Pavone presented his new book 'Expats' which has got stunning reviews. He lived as an expat in Luxembourg.  Accompanying his wife who was to work a couple of years in Luxembourg he had to get use to being at home, taking care of the kids and all the things that makes the normal life go on. With a background in editing it seemed like a good idea to take this opportunity to write a book. It was a fantastic opportunity to meet the author and to put a lot of questions to him about his writing. The book being so popular so this might be the last time that you had the opportunity to meet him in such a private environment. 'Expats' is about expats but maybe not in the sense that we think about it. The book is set in Luxembourg (if you know it you will recognise you) as well as in other European countries and cities. In the centre of the story are tw
Post a Comment
Read more

This is a sort of Swedish ‘Da Vinci code’. The first book of journalist Jan Wallentin and sold to at least 14 other countries, so if you are lucky it might be available in your language. It is an easy read and difficult to put down. I finished it in no time at all. The story begins when a diver discovers a body in a mine shaft in Dalarna in the middle of Sweden. Due to the air deep down in the ground the body is well
Post a Comment
Read more
More posts